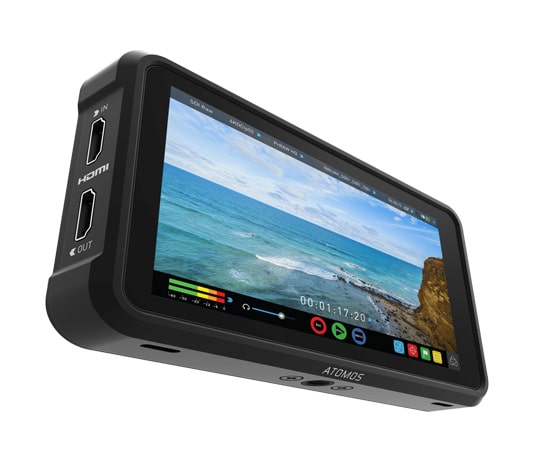 Atomos has just released the newest edition of monitors/recorders, the Atomos Ninja V 5” 4K HDMI recording monitor. The Atomos Ninja 5” is an on-camera monitor/recorder that records and plays back DCI 4K, UHD 4K, and HD video from a purpose built mini SSDs. The popular Atomos Ninja V is thinner at 3.5 cm thick. The Atomos Ninja 5 shares the same features of the inferno like the Atomos OS and touchscreen, but in a compact size. To withstand the pressures of production, the Atomos Ninja V 4K HDR monitor has all aluminum frames, which makes it light to touch and feel. It is powered by a single L-series battery.

– 1920 x 1200 Touchscreen display
– 10-Bit Exterior Viewable Monitor
– 4K HDMI input
– 1000 cd/m2 brightness
– AtomHDR Mode with 10-stop dynamic Range
– 10-Bit 4:2:2 ProRes & DNxHR Encoding
– Records to Mini SSDs
– Supports a variety of Log Formats
– Single Sony L-Series Battery slot
There are a huge range of accessories that is compatible with the Ninja 4k external recorder monitor that can be purchased separately from the market.
Monitor
The Atomos Ninja 5 features a 10-bit FRC IPS screen with a brightness of 1000 cd/m2, which makes it suitable for both exterior and interior conditions. The unit is 1 inch thin and weighs only 320gms and has a 5.2inch display.

The Atom HDR display technology allows you to monitor your log gamma footage accurately. You can calibrate the display for perfect color accuracy every time while play out to HDR or SDR TV sets. The images can be seen in daylight on the near edge-to-edge anti-reflection screen. The recorded footage is not flat and washed-out like in other monitors. There is no need to use a LUT to compress the dynamic range and color space. The monitor supports popular log formats from Canon, Sony, Panasonic, ARRI, RED and JVC cameras.

With the 4k 60p or HDP240, recording games was never so fun and that too from any HDMI gaming unit. Place the Ninja V in-between your unit and the TV to record for hours to the off-the shelf SSD drives. Auto HDR flags means perfect TV setup every time. It is one of the best gadgets to show off your skills or check your game development on the most stunning video recorder that is ever built. You can record high resolution 4k footage in DCI or UHD formats up to 60fps including the 24 and 25fps for a more film like appeal. All the recordings are stored as high quality Apple ProRes or Avid DNxHR files with 10bit 4:2:2 chroma sub sampling. According to the storage needs and project, different varieties of bit rates are available.

Audio can be input or output through the multi-pin locking connector. A 3.5mm headphone jack on the side can be used for convenient audio monitoring.

Log and Signal management can be difficult to monitor with the conventional equipments. With the built-in HDR signal management functions the log signal can be converted to the PQ standard for easy compatibility with the existing consumer and professional HDR equipment.

The Ninja V comes with a bi-directional high-speed video port along with power and audio allowing future expansion modules to increase the Ninja V’s capabilities.

The AtomOS provides you with simple tools for accurate set up and one touch operation. It ensures great recording every time. The AtomOS gives speedy playback, slow motion and frame-by-frame analysis for instant review.

The Atomos Ninja V supports Anamorphic de-squeeze that allows you to comfortably view anamorphic footage with a squeeze of 2x, 1.5x, 1.33 and Panasonics 8:3.

For high quality recording you will need a quality monitor for viewing and the Ninja 4K HDR monitor is the best in the market today. Audio can be input directly from the camera digitally through a HDMI or fed in analogue via a stereo 3.5mm line/mic socket, which is good for cameras that don’t have a mic input. 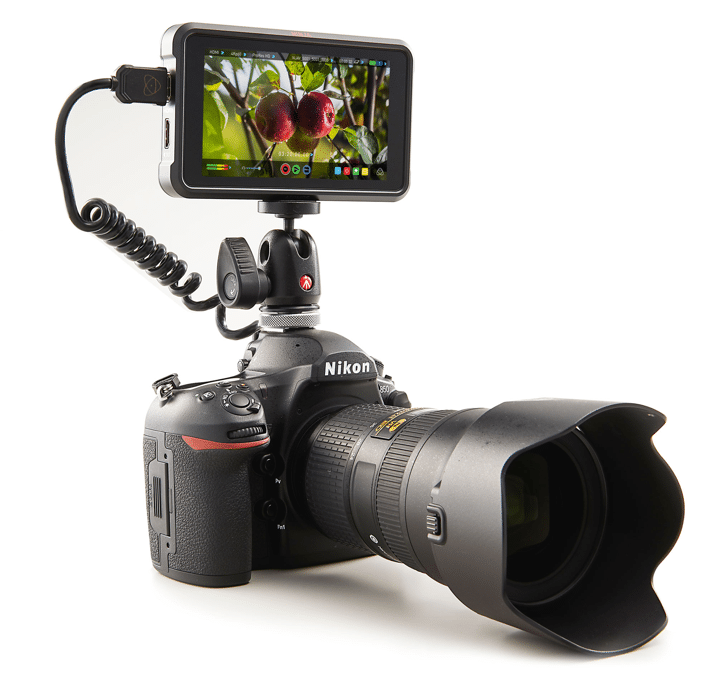 Easy Editing and Upload on Mac and PC

You can immediately transfer the recorded files from the Ninja V to the Mac or PC for editing. You can tag while recording on the fly for direct-to-edit look-up with up to six streams that are edited directly from the SSD in the final cut pro X, Adobe premiere or Avid media composer. Videos and games are supported for fast transfer to their targeted audience. 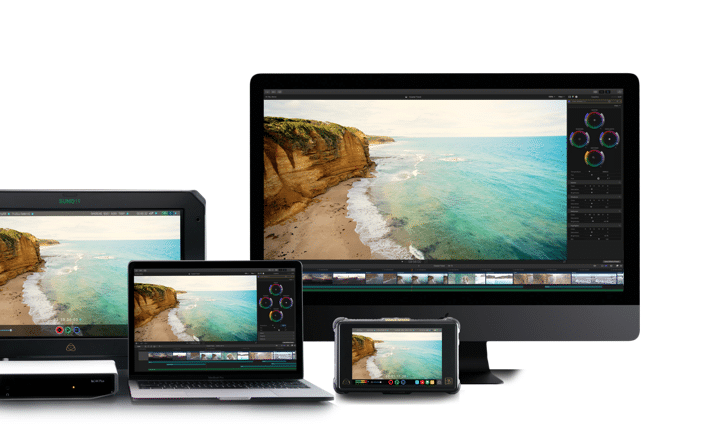 Inferno is known to be on the louder side if you have to capture audio using the recorder. It is virtually silent when operating due to the more efficient processor and chips used in the recorder. The Ninja V monitor is 1000 nits and supports the HDR viewing and processing. It is extremely silent even while in operation due to updated chips. The Atomos Ninja 5 has a small fan inside, which doesn’t start under normal use, but works only when the recorder is used in very high heat environments.

The Atomos Ninja 5 is powered by a single Sony NP type battery. It gives the Ninja 5 approximately an hour of record time in 4K 60fps on camera monitor. When used as a monitor the Ninja V will last longer. The media is an SSD drive Atomos, which Atomos calls the SSD mini. It is a standard SATA, but much thinner at 7mm and 18mm in length. Atomos is planning to team up with Angelbrid, Sony and GTech to make these ultra light and thin SSD drives.

The Atomos Ninja V 5 has a new feature added, which is an expansion slot that supports high-speed audio, video and power. This potentially gives the Ninja V the option for wireless transmitter or devices that 3rd party companies might want to develop.

The Ninja V costs $695 and the shipping date has not been confirmed yet.