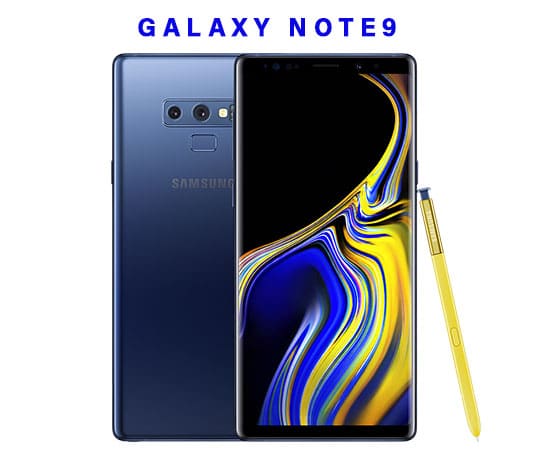 Samsung, the popular South Korean major, is preparing to launch its high-end flagship smartphone, the Galaxy Note 9 on August 9, 2018. The Galaxy Note 9 is always a big product and its release date is eagerly awaited. It is an Android phone with a large screen and a handy S pen. There are also rumors of an in-screen fingerprint sensor, all of this news related to the Galaxy Note 9 release and its price and features are all premature. There is a possibility of seeing Bixby 2.0 and an improved dual-lens camera and HDR video recording all of which were missing in the Galaxy S9 and the Galaxy S9 plus.

Here is everything that is known about the Samsung Galaxy Note 9, the extra large and much awaited Android phone. 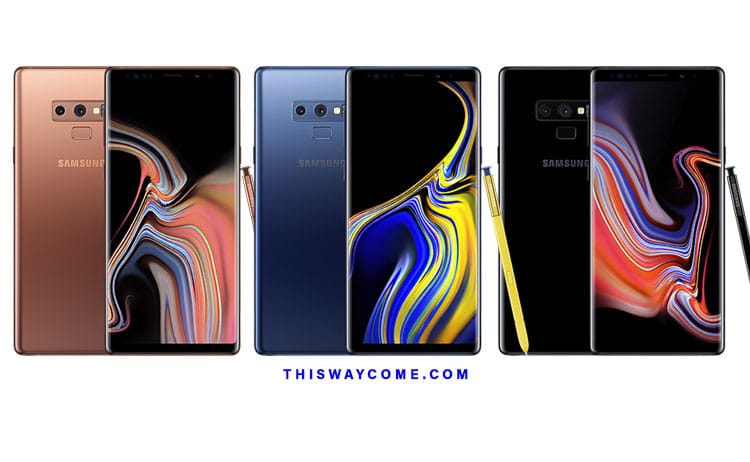 As we all know by now, that the Samsung Galaxy Note 9 release date is big news along with its speculated price, but one thing for sure is the phone size. This will be a big size phone. It will be a bigger update to the Galaxy Note 8 and slightly bigger and better than the Galaxy S9 and the Galaxy S9 Plus, which was launched all over in March. There won’t be a massive update than the last year’s phone with a 6.3 inch screen. But, expect some changes in the internal specifications instead of a huge drastic change on the outside.

According to the sources, Samsung is planning to launch the Galaxy Note 9 sometime in August 2018. August 9, Thursday is the rumored to be the launch date with the much anticipated announcement expected to happen in the New York City. Last year’s phone was announced on August 23.
There is a lot of evidence backing this and the Note 9 is said to be codenamed “Crown” a prototype that was ready in the first quarter of 2018, said an investor. Market watchers have pinned hope on the second week of August.
Samsung was known to be testing the firmware for the new phone ahead of the schedule, which is two weeks earlier than where it was with the software for the Note 8. The S9 firmware was tested much before S8 and that was launched earlier too. Logistics companies are also reporting of screen panels built two months earlier than normal, with the launch date set to late July. That may be too hurried, but August 9 seems to be the more likely date for the launch.

Why the Early release date?

Samsung wants the Note 9 to grab a lot of attention and eyeballs so much so that it is enough to beat the expectation from the iPhoneX 2 and the iPhone 9 phones that Apple is going to launch in early September.
Yes, the Note series phones are announced first, but the reality is by the time the Note phones comes in the market, the hype around Apple’s new iPhones already increases to a crazy level. That is why we expect Samsung to launch the new Note 9 earlier. It wants the first phones to reach to people’s hands in as early as August or early September.

Whenever the Galaxy Note 9 will be released, it will be expensive for sure. The Galaxy Note 8 costs $929 at launch and there is no chance that Samsung is going to lower its prices for the Note 9 especially now that Apple has increased the Smartphone prices even higher with its iPhoneX.
In most countries the S9 and the S9 plus saw an increase in prices, however the prices were cheaper in the US. So, depending on where you buy the Note 9 there is going to be some difference in the prices. If you want a phone that is cheaper, then you will have to go with the Note 9’s predecessor with a stylus.

The biggest rumor about the Samsung Note 9 is about the fingerprint sensor, which speculates that it is imbedded directly into the phone screen. Several in-screen fingerprint sensor phones coming out of china have been tested and Samsung is also testing multiple in-screen solutions. It is expected to use one of them, which could allow Samsung to use a larger battery for its Note 9.

This makes the news from the source true about an in-screen fingerprint sensor and a 3,850 mAh battery in the Note 9. However, an earlier rumor points to the in-screen fingerprint sensor skipping the Note 9, S9 and the S9 plus, Note 8, S8 and the S8 plus before. There is enough reason that it will come on the Galaxy X next year.
Both brands, Samsung and Apple have been trying hard to achieve this in time for its handsets, but have failed. This has made Samsung to move the scanner to a sub-optimal position on the back of the Samsung Galaxy S8 and Note 8, while Apple abandoned it altogether for the iPhoneX.
There is news about Samsung applying for a patent showing a handset with a fingerprint scanner built into the screen. It would probably show digitally where the users need to place their fingers and provide vibrations as their feedback. Huawei and Vivo have showcased this technology in a phone this year, but Samsung seems to be using the ultrasonic-based in-screen fingerprint sensor for their Note 9. Huawei and Vivo use the light-based optical under glass fingerprint sensors.
According to the sources in the supply chain, Samsung has placed the scanner on the back, just like its present phones, so there is a very faint chance of the in-screen fingerprint scanner coming in the Note 9.

Leaks and Rumors about Note 9

As said earlier, the Note 9 could come with a 3,859 mAh battery, which will be much bigger than the 3,300mAh one on the Note 8. It is slightly larger than the 3,500 mAh battery found in the Samsung Galaxy S9 plus, so it is believable.
The other rumor about the Note 9 battery is that it can climb to 4,000 mAh capacity, which is a new high for the Samsung device. There is also a rumor about the screen size being 6.4 inches, which should not be taken seriously.
The Samsung Galaxy Note 9 is rumored to have features that includes a Snapdragon 845 chipset, 6GB RAM and runs Android 8.1, which is the same specs found in the US version of Galaxy S9 plus. There are also talks about Samsung pushing the configuration to 8GB of RAM and 256GB of storage.

The other ambitious goal for the Note 9 would be to sport a bendable display. Samsung has been working on this feature and this technology could land in a phone late this year. However, it might arrive late, so Samsung might not experiment it with their flagship phone like the Note 9. There is also a patent that shows a phone design with screen that curves at the right edge, but oddly not at the left. It is an unusual look for a phone and different from the Note 8, so there is a strong doubt that this may not be used for the Note 9, but you never know.

As far as the looks are concerned, there is always a chance that the Note 9 will be made from a new material, as Samsung has trademarked the “Metal 12”, a material that is both light and strong. According to Korea Herald reports, Samsung might equip the Galaxy Note 9 with an NPU (Neural Processing Unit). This is essentially the AI chip like Apple and Huawei have been using for their flagships. Not, sure whether Samsung will use this chip, but if used it would surely speed up certain functions of the phone.

Certain specs are going to be sure, which includes the large curved super AMOLED display, an S pen stylus and 6GB of RAM. The internal storage should start at 128GB given that Samsung markets this as an enterprise class smartphone. The Note 9 is most likely to sport the top-end Snapdragon 845 or Exynos 9810 chipset, exactly like the one in S9 and S9 plus.

There are rumors of Samsung working on Exynos 9820 chipset that might bring about faster speeds and the much anticipated HDR video recording. New phones like the Sony Xperia XZ2 are having the HDR video recording feature and Samsung would want to play the catch up game.

What are the expectations?

The rumors may be many, but as a user we would have certain expectations from the phone like the following.

There is a rumor about this feature coming up in the Note 9, but if it does come it will be a great headline feature for the phone. Having a scanner behind is awkward, but building it onto the screen would make it easy and high-tech. It is a futuristic design feature that could make the Galaxy Note 9 standout from the rest. As we all by now know that Samsung is working on it, but whether it will feature on the Note 9 is something to be seen.

Galaxy Note 8 has some very great features, but their speakers are not that great. It has just a single bottom firing speaker, so for the Note 9 we would want to see at least two speakers and ideally positioned at the front of the phone for the sound to travel towards you. Considering the size of the Note 9, it could even manage four speakers for a truly big sound.

Bixby is the new feature that is found in this year’s Samsung flagships, but in its present form it needs a lot of improvement, especially when it comes to understanding what you are saying. By the time of the Note 8’s launch we want it to be a true Google assistant and Siri rival. However, good it may be in future, the Bixby button needs a remap because everyone is not going to use it.

With the Galaxy Note 8, Samsung was a little conservative with the size of the battery, considering what had happened with the Note7. The charging time is also longer. It would be better if Samsung finds ways to deliver two-day battery life and a fast charging feature with the Note 9.

Although the iPhoneX’s face ID is the talk of the year, but it is not the first phone to sport this feature. The Samsung Note 8 does have this, but it is not very secure. For the Galaxy Note 9 we want face scanning to return, but hopefully it is better and secure.

The front of the Galaxy Note 8 is all screens, but there is still a sliver of bezel at the top and at the bottom. We would like Samsung to reduce that for the Galaxy Note 9. By doing so it would make the potentially very big phone a bit more manageable without having to shrink the screen.

The Samsung Note is surely a premium product from the stables of Samsung. But, there are a few compromises made to combine a phone and a tablet together that could be hard to get used to. The South-Korean major is supposed to have ordered to reduce the thickness of the smartphone by 0.5mm resulting in a good-hand feel and improvement in the grip.